Here’s a little known story about the United States Constitution. First, let’s review the preamble after the words: “We the People…

“We the People of the United States, in Order to form a more perfect Union, establish Justice, insure domestic Tranquility, provide for the common defense, promote the general Welfare, and secure the Blessings of Liberty to ourselves and our Posterity, do ordain and establish this Constitution for the United States of America.”

James Madison’s idealistic prose written in 1787, vaguely describes guidelines for America’s birth certificate. The above statements are hard to translate into human reality. Still it never hurts to refresh our memories: so we can ponder -what exactly is America’s True North?

However, let’s put that aside and focus on our shared interest in handwriting instead. Today, let’s talk about the penman who hand wrote the world famous calligraphy displayed in the Constitution.

Who is The Man Behind The Quill?  He did not sign or initial his work.  His story might have been lost to history if it were not for the curiosity of a librarian and amateur historian named Arthur Plotnik.  Mr. Plotnik’s sleuthing took 4 years of independent research. He explored old records, compared handwriting styles, and discovered the actual receipt for the $30 pay the engrosser received for a weekend’s work.  Plotnik’s eye for nuances in penmanship supported the earlier claim that the penman who wrote the Constitution was indeed, Jacob Shallus.

In 1937, Jacob Shallus was first credited with engrossing America’s Constitution. And Mr. Plotnik wanted to know more about The Man Behind the Quill. Who was this fellow Jacob Shallus?  What was his life really like? Plotnik’s need-to-know obsession inspired his investigation into fleshing out a brief biography of this 18th century American.

The son of German immigrants, Shallus was born in Philadelphia in 1750. He volunteered to fight in the Revolutionary War, and survived great hardships through the winter of 1776 on the Canadian front. Over the next ten years, while scrambling to support his growing family,  Shallus developed a talent for penmanship which provided steady income and also earned him a degree of respectability. Shallus became an assistant clerk to the Pennsylvania General Assembly. Being in Philadelphia in 1787, at the time of the Constitutional Convention, Shallus was available to quickly engross the latest revised draft of the Constitution. He was given the notes on Saturday evening, September 15, 1787 and instructed to return the finished document by Monday morning when the delegates would gather to sign the Constitution. 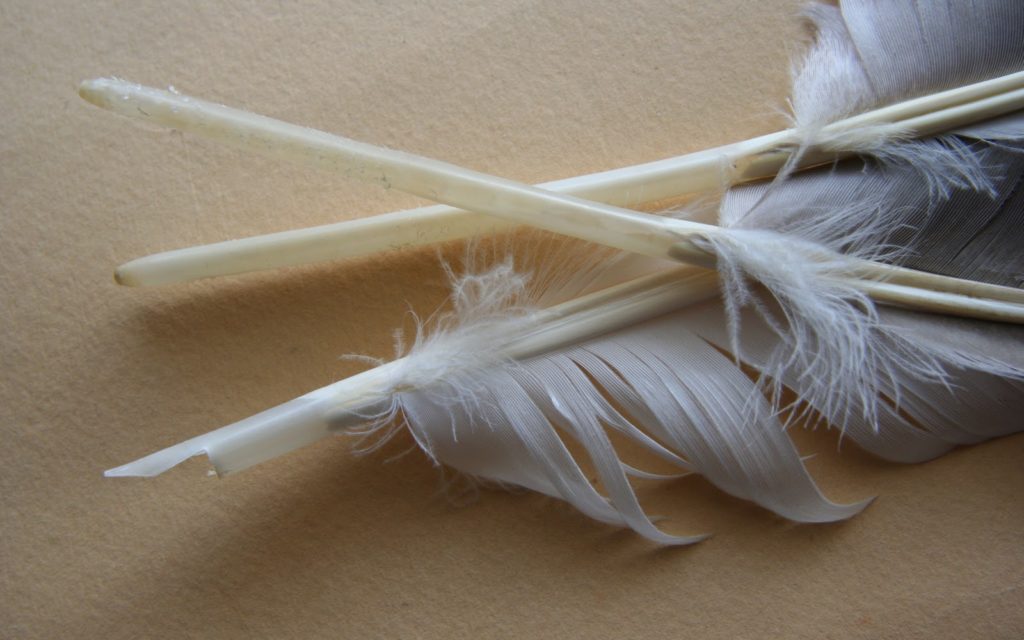 Shallus worked from Saturday evening through Sunday night, engrossing roughly 25,000 individual letters or 4,400 words- into a text that would fill most of four sheets of animal skin vellum parchment, each measuring about 2 feet square. (The Man behind the Quill, p. 5)  Shallus would have been working with goose quills, using ink made of iron filings in oak gall. Keeping the lines straight was a task accomplished with taut strings or light scoring of the parchment. He would be transcribing through the evening with oil lamp lighting on his writing table and basically, he would be working non stop. The slowest possible pace, under these circumstances, would have been 160 words per hour,  leaving little room for embellishments. (p.49) “Shallus engrossed the entire document except for the list of states at the end, which are in Alexander Hamilton’s handwriting.” (Wikipedia)

Scrutinizing the different type styles and spacing used in this document- the flourishing alphabet of the body of the work and the Gothic or “black letter” of the ornamental headings, Plotnik speculates that perhaps Shallus’ eldest son, Francis, might have helped his father with the commission.  Plotnik discovered that Francis was training to become an engraver and thus he had lettering skills, as well. (Francis later became an assistant engraver at the U.S. Mint. (p. 51)  Yet, we will never know for sure, if “dad” got help or not during that weekend.

We do know that Shallus did make a few mistakes. In the following image, we see where a whole line of script that had to be scraped out.

When a word had been accidentally omitted, Shallus managed to elegantly insert it above the line. Finally, he wrote “the errata statement” a short paragraph detailing his errors (no doubt a product of his haste and fatigue, p. 53).  This paragraph was to be taken into account at the end of the document.

Admirably, Shallus finished the job on time, and was on hand to witness Franklin, Washington, and Madison sign their names to the document he had just engrossed that past weekend.

The $30 fee Shallus received was the government’s one time payment for engrossing documents. To put that in perspective, a messenger, at that time, was paid $25 a month, and a doorman received $33 a month, while Secretary Jackson, the Secretary to the Continental Congress, appointed by Alexander Hamilton, earned $217 per month.(p.55)

Shortly after the Constitutional  Convention convened, Shallus sought work with the Commonwealth of Pennsylvania as an official scribe. That position alone was not sufficient to support Shallus’ big family with 8 children, and he took on freelance work to supplement his income.  Still, Shallus was hounded by financial troubles. Just five months after the Constitution was engrossed, he was arrested for a debt about equal to the fee for the engrossing. He wrote petitions for help and it appears that Benjamin Franklin approved a small fee to help the faithful scribe.

Spared from debtors’ prison, he continued to serve on the Pennsylvania General Assembly for the next 2 years. In 1790 he was elected as assistant secretary to the Pennsylvania convention.  And shortly thereafter, he engrossed the state’s new constitution. Records indicate that Shallus’ fortunes increased in 1791, with some old debts paid that were owed him.  Briefly, Shallus’ family enjoyed a fair amount of financial security just before the onset of the Yellow Fever Plague of 1793. At that time, many residents fled Philadelphia for safety. 5,000 people died before the plague subsided. There is no indication that the Shalluses fled the city. Shallus survived another 32 months after the start of the epidemic. Plotnik suspects that Shallus may have been weakened by the effects of the fever. (p.63)  On April 18, 1796, Jacob Shallus died from a “consumptive illness.” He was only 46 years old.

Jacob Shallus may not have been “historically significant” as in the pantheon of the  luminaries he shared space and time with, yet the mark of his craft and labor upon our country’s history is invaluable. He was a patriot, a devoted family man, and a dutiful American citizen. To recognize him for his anonymous contribution yields a sense of resolution, and shines some well deserved light upon an unsung American hero. (The Man Behind the Quill, p.ix)