“I feel I hold her heart in my hands…holding my mother’s letters. ” -Sherry Turkel, Epilogue- Alone Together, 2011.

The kids called him “Mr. Robert.” Bobby’s small creative arts class at a Church daycare was his “passion.” The kids just loved him. He allowed them to be who they are. He let them shine. Together they made art, sang songs, read books, danced, and put on plays. If they had issues, he let them talk, and he listened. Sometimes, Bobby would lock horns with the moms, say- over a book like Sendak’s In the Night Kitchen.  But in the end, he and the kids prevailed.

I know all of this through the letters Bobby wrote me. We were pen pals for the last five years.

Thinking back, I feel that I have known Bobby Douglas most of my life. When I moved to New Haven in the 1970’s, he was my mailman. When I was hired at the post office in 1984, Bobby and I worked in the same station at Brewery Street.

Bobby had one of the longest routes in the city. He worked extremely hard, giving 40 years of his life to delivering people’s mail. Somedays he would have his lunch perched on top of the mountain of mail he held in his arms. He wouldn’t take a break.

He could be a bit of a curmudgeon.  And he would get into squabbles at the job with silly supervisors or lazy co-workers. Bobby did NOT suffer fools gladly.

He DID enjoy talking about the theatre, the arts, a great book, or an interesting New Yorker article. Once, we rode the train to New York City to see Angels In America. Another adventure took us on a plane ride to Martha’s Vineyard.

Bobby was  always supportive of my letter writing presentations. He would show up even when only four people attended.

He retired five years ago, just a year before I did. One day at work I found a letter with Bobby’s tiny handwriting on it. He sent me an article he thought I’d enjoy. And so our pen friendship began. 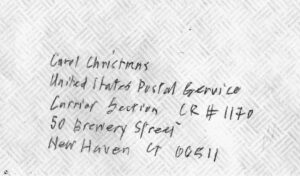 Gossip, book/movie reviews, trips, family stories- were all topics for our letters. We became the best of friends through the mail. I’d send him art supplies and craft books for the kids’ classes. He sent me beautiful stationery and a crazy book about cats wearing sweaters. Bobby mailed greeting cards for all the calendar holidays- Halloween, St. Patrick’s, Easter, Thanksgiving…And he’d simply sign- “Robert Douglas.”

I have to comment on Bobby’s unique handwriting. It was mostly printed and ever so small. I need a magnifying glass to read what he was saying. He took full advantage of the white space on a postcard or notecard.

Life happens. And there could be gaps of time in between letters. I’m not always prompt with my responses. But when I didn’t get a Christmas card from Bobby, I knew something was wrong. I sent out a few notes, then an email. Nothing. I didn’t have his phone number. Finally I googled:  “Robert Douglas,” and discovered that Bobby had died on Dec. 8th, 2020. “Suddenly. Unexpectedly. At home in his sleep. He was 69.” My age.

I am writing this because I can no longer write to Bobby.

This is my memorial. I am grateful that I knew him…That he trusted me with his stories. I am sorry that he did not have a longer retirement… That COVID-19 took “Mr. Robert” away from the kids he loved so much…That we didn’t meet for a socially distanced visit in the park last September. I thought we would meet up in the Spring…

Death is always so inconvenient. 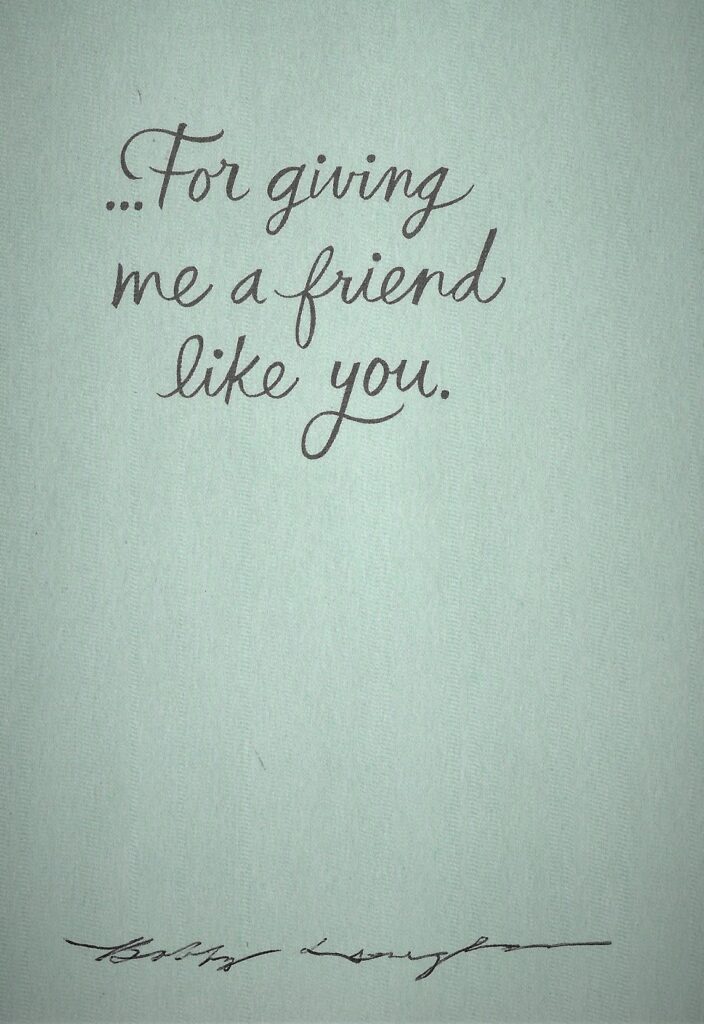 The good news  is I have Bobby’s letters and I can visit him by simply looking at his tiny handwriting with my magnifying glass and re-reading the stories he chose to tell me.

Such is the power of a friendship in letters. Letters are keepsakes.

I, too, am grateful to the universe…for giving me a dear friend like you…Bobby Douglas.