“They call me Cinque. I am a rice farmer and a proud husband and father of 3 delightful children. One beautiful day in the Spring of 1839, while I was walking along the road in my native country of Sierra Leone, 4 strong men jumped out at me and held me down. They tied my right hand to my neck, and carted me off. That was the beginning of the nightmare. 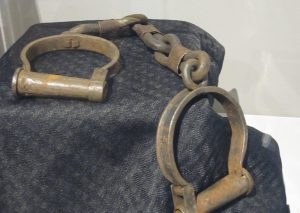 I was quickly sold to some Spaniards. Of course, I could not understand all of what was happening because they spoke in an unfamiliar tongue. Soon I was placed in chains, wrists and ankles, and crammed into a tight cargo space only 3&1/2 feet high. It was cold, dark, and fetid. I was surrounded with other frightened African men and women. We could not move. We sat in our own waste. One cup of rice and one cup of water was all we received each day. Beatings were frequent. Many died during that 3-month middle passage.

In July, we reached Havana. 53 of us were transferred to a much smaller ship, The Amistad. We numbered- 49 men, 3 girls and one boy, all the children were under 12 years of age.

Again, we were confined and chained by Spaniards. The cook gestured that he was going to cut us up and eat us. I could not know if his threat was real or not. I was crazy with fear and I began to search for a way to save my life. I found a nail on the deck and hid it. Later I used it to pry open the lock that held my chains in place. On the 4th day out, while the Spaniards slept, I quietly freed everyone. We found a box of sugar cane knives and thus the mutiny began. The ship’s captain and the cook were immediately killed. 2 crew members escaped, and 2 begged for their lives indicating their potential usefulness for steering towards Africa. They promised that they were taking us home, sailing towards the sun in the daylight, while at night they steered North along the coast of America.

As the ship zig-zagged along, food supplies dwindled, 8 men died, and my mistrust grew. After 2 months, we reached Long Island Sound and then we were captured in New London by the US Navy. They released the Spanish slave traders, and threw us, Africans, into jail in New Haven. We were charged with mutiny and murder. 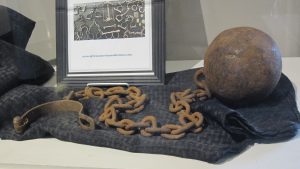 Finally, some white people appeared who were actually helpful. I could not know what an abolitionist was, but they were kind people. They brought us food and warm clothing to wear. Some young (Yale students) came to teach us some English words. Many townspeople were gathering funds to help with our defense. And shortly thereafter, they brought a fellow African to the jail. He spoke Mendi, our native tongue. We were so relieved to have our voices understood, many of us cried and clung to James Covey, a freed African sailor.

We did not understand why so many men came to the jail wearing dark stiff clothing, speaking in quiet serious voices, carrying volumes of paper in leather satchels.

A Judge Judson said, “(We were) …Natives of Africa, and were born free and ever since and still of right are and ought to be free and not slaves.” And who could understand that? Basically, they claimed that we were not legal Cuban slaves.

John Quincy Adams, another wise elder, went to the Supreme Court for us. His argument must have been pretty good because the court had 5 Southerners and 4 Northerners. Yet, they ruled that we were entitled to our liberty. And after that we were freed to breathe the fresh air again, and walk without chains after 2 years’ captivity.

The kind white people invited us to stay on at a farm in Farmington, CT. They worked to raise funds for us to return home to Africa. They hoped we would set up a Christian Mission for them in Sierra Leone.

Soon, I, Cinque, along with 35 of our original group, set sail on a large ship headed for Africa.  We were once again free men and women.

I had been gone for nearly three years, yet, I easily found my way back to the road where it all began.  I looked for my wife and children, but they were all gone.

They call me Cinque, and that is my story. ”

-Cinque did learn to speak and write some English. He traveled with a group of abolitionists to help raise the money needed for his return passage.

-Cinque’s final story is not documented. His family most likely fell captive to the slave trade.

-The returning natives did start a mission in Sierra Leone.

-The Amistad case was the First Civil Rights Case ever heard before the Supreme Court. The decision had no impact on the legality of slavery in this country. The most important legacy of the case was the cooperation that blossomed between two vastly different cultures to achieve a common good: Freedom. (The New Haven Museum)

https://www.newhavenmuseum.org/ Story and most photographs are courtesy of The New Haven Museum.