Dear Reader- Letter writing is making a comeback! People are seeking the comfort of the deeper connection that comes with a handwritten letter during this time of global uncertainty.  Supportive articles abound. In case you didn’t see this one, I’m posting it here, and I’ll send more as I find them. Keep the ink flowing! -Carol

Snail Mail Is Getting People Through This Time

Letter writing has helped people meaningfully connect during this period of isolation, grief and unrest.

As protests gained momentum around the country, she worried about them attending and possibly being tear gassed or shot with rubber bullets. Writing, she said, was another way the students could take action against police brutality.

“A letter is one of the most undervalued but important ways of expressing yourself,” said Ms. Hadnot, who teaches sophomore literature and writes under the name Brianca Jay. “It doesn’t have to be perfect or written with the best grammar and semantics and flowery prose. It just has to be you.”

The students, with help from other community members, have written 75 letters so far, addressed to elected officials including local legislators and the president of the United States.

Snail mail has taken on fresh resonance in this period of isolation, grief and unrest. Sympathy cards are selling out as the coronavirus’s toll continues to rise. Constituents are mailing in primary election ballots and addressing handwritten notes to local officials with compliments and complaints. (In some cities, they may also be sending letters to the police.) Many more are writing postcards to friends and loved ones, and calling for the United States Postal Service to be saved from its dire financial straits.

First-class mail has been a declining category for the Postal Service for over a decade. It will be a few months before the service publishes statistics on mail volumes for April and May, but it did see “significantly higher product sales” of items including stamps in April, according to a representative. A Postal Service survey whose results were published in May found that one in six consumers had sent more mail to family and friends during the pandemic.

Kenzie Myer, 21, said that she wasn’t a letter writer before the pandemic, which forced her to leave a study-abroad program in London and return to her home in Pennsylvania.

“I came back and hadn’t seen any of my friends from my home school,” Ms. Myer, a rising senior at Arcadia University, said. “I started sending them letters.” Most of them open with a disparaging line about her “garbage handwriting,” she said, then become more personalized.

For a friend whose 21st birthday passed in lockdown, she wrote about how she couldn’t wait to celebrate in person. For her partner, who lives in Australia, she writes “a lot of sappy stuff” and smears the page with roller-ball perfume. She posts her correspondents’ responses on her bedroom wall near her desk.

“Even though I can’t see the people that I love, they’re sending love back my way,” Ms. Myer said. 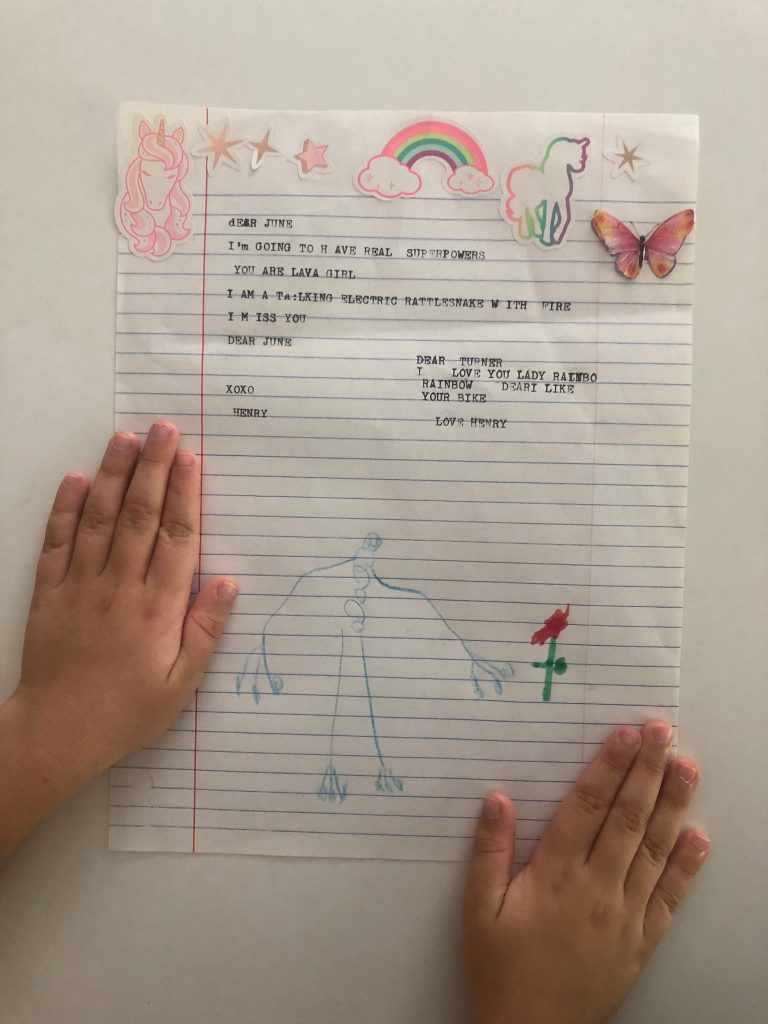 Henry, 4, punches out letters to friends and family on a typewriter he received for Christmas.

Justin Hodges, 46, moved to Chicago three years ago and soon received a postcard from a local candidate. “This was not some soulless mass production,” he said. “Someone took the time to spell my name correctly and draw stars and hearts. It’s more personal.”

Eventually Mr. Hodges, a former flight attendant and now self-described “stay-at-home cat dad,” started writing postcards for her campaign as a volunteer and then for an organization that encourages people in swing states to vote. Over the last month, he has written 500 postcards that will be sent to Wisconsin voters closer to the general election in November.

The coronavirus has made many people realize just how important the Postal Service is, Mr. Hodges said, even as it feels like it’s under siege. “We’ve gone to this online society, but letters encourage voter turnout and civic engagement. They’re warm and personal — tangible.”

When Laura Stanfill, 44, is ready to send out her weekly batch of letters, she and her 12-year-old daughter walk to the mailbox near their home in Portland, Ore. “We’ve made this ‘just the two of us’ walks. We wear our masks, and she complains about her mask and we talk,” she said.

On April 13, Ms. Stanfill’s best friend of over 30 years died of complications from Covid-19. She sent out sympathy cards. “Then I wanted to send more,” said Ms. Stanfill, who is a writer and the publisher of Forest Avenue Press. She started collaging cards with paper scraps and magazine clippings and sending them to friends, family and acquaintances alike.

“All this letter writing and card making is a way forward in my grief,” Ms. Stanfill said. In addition to the cards, she’s also exchanging “letters” with a pen pal by filling up a single notebook passed back and forth across the country. “We’re centered at home, and to be able to share something and send something to a person we can’t see feels really important.”

That sentiment seems to bridge generations. In Los Angeles, Ronan Bowie, 4, has enjoyed receiving riddles from his grandmother in Tucson, Ariz., by mail. “We’d have to wait a few days for the answer to arrive,” said Ronan’s father, Soren Bowie, 37. “That got him excited about the mail in a way he’d only been with packages before.”

Ronan started exchanging letters with his best friend from school. “I miss you” may be the only text in these letters, which are full of a lot of drawings and stickers. “They see each other on Zoom sometimes,” said Mr. Bowie, who is a writer. “But for a child, I think there’s something much more tangible to a thing you hold and have to find a place for in your house.” 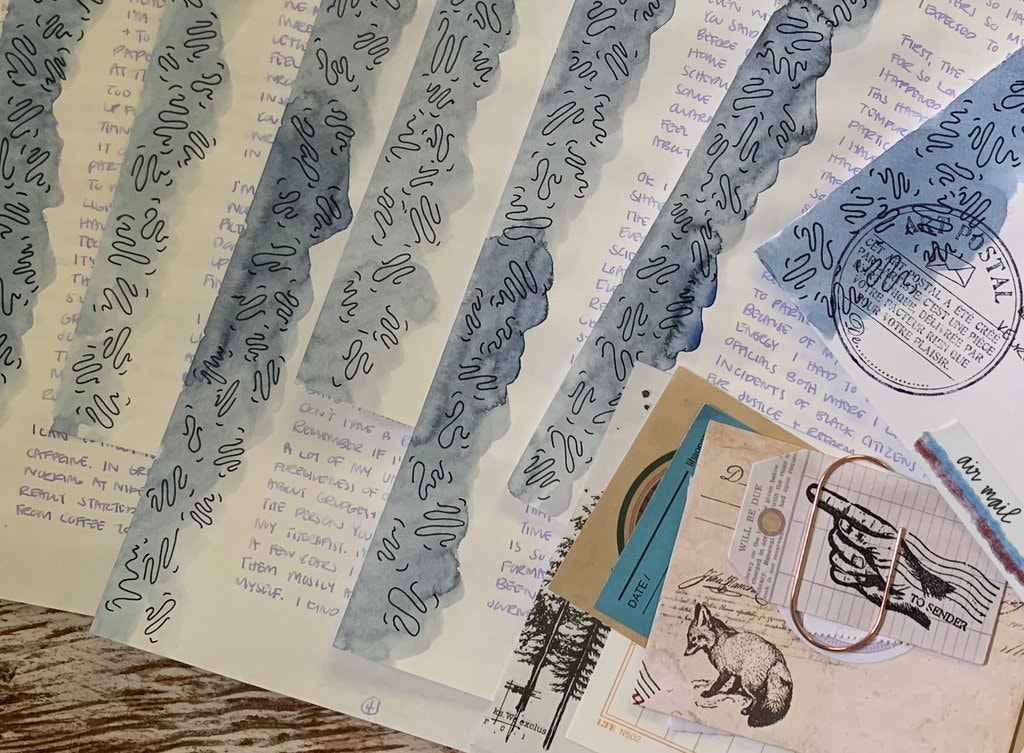 “People’s worlds are really small, and the ways they used to connect with people aren’t really working,” said Christianna Wincek, 35. “When I was working full-time, mail was a chore,” she said, full of bills and things she didn’t want to deal with. “When I started spending the bulk of time at home, mail became an event.”

Ms. Wincek, a textile designer, has been home in Portland and unable to work since December because of chronic illness. That’s when she started writing letters: to friends and to people in assisted living facilities through a nonprofit called Letters Against Isolation.

Letters have also become part of an effort at home schooling for Katie Case, 41, who lives just outside of New Orleans and runs a real estate agency. She posted on Facebook asking people in her network to send their addresses if they wanted a letter from her son Henry, 4, who punches them out on the typewriter he asked for as a Christmas present last year. Most of them are short and written on Post-it notes or pieces of paper only a little bigger.

Ms. Case writes a companion note for each of her son’s letters, noting that between the small pieces of paper and typed words, “it looks a bit like a ransom letter.” In a letter to Ms. Case’s family friends who live by the beach,” Henry wrote simply: “Do you love sea monsters?” To a nearby friend whom Ms. Case described as her son’s “lady love,” he wrote: “You are lava girl. I am a talking electric rattlesnake with fire. I miss you.”

People have sent thoughtful replies to Henry, who so far has shown less interest in receiving mail than sending it. “I’m saving them all, obviously,” Ms. Case said. “I think one day he’ll realize what a special thing this is.”