When Carol Christmas was a letter carrier for the U.S. Postal Service, she noticed she was delivering fewer and fewer real letters. She also noted that on those rare occasions when she did hand over to a customer a handwritten letter or card, the recipient’s face broke out in a “gleeful, nearly giddy expression.”

“It was like they had found a four-leafed clover!” Christmas recalled.

Toward the end of her 33-year letter carrier career, “a light bulb went off,” she said. “Too, too many people told me of disappointment and hurt feelings when no response ever came after a gift was sent.”

She thought to herself: “That’s something I could help with. Why let valuable connections fall to the wayside?”

Christmas realized that if people are “too busy” or embarrassed by their penmanship, she could write the notes for them. “It’s like having a social secretary. Eleanor Roosevelt and Jackie Kennedy both had social secretaries who handled some of their correspondence for them. How classy is that?”

I learned about her new business, The Write Way, in a fitting manner: she mailed me a hand-written note, exhibiting her beautiful penmanship.

In a half-dozen sentences Christmas told me about her enterprise, including this pitch: “It’s about preserving courtesy and connections.”

“It seems that marketing courtesy is a hard sell these days,” she added. “I wonder if you’d like to write about my idea. As I recall, you are a big fan of the handwritten letter. Am I right about that?”

Indeed, I am a fan of the letter. In my attic I’ve got a shoebox filled with my lifetime of letters from my grandmother, my parents (all three of them now deceased, so the letters mean more), my high school girlfriend, my brother and my sister. I’ve also got my mother’s collection of responses she received after she wrote warm and approving letters to Sir Winston Churchill, President Richard M. Nixon, President Gerald Ford and many other public figures.

But as I confessed to Christmas when I met her last Wednesday morning at her home in Hamden, I too have gotten out of the habit of letter-writing. These days when I communicate with my brother and sister, it’s done through emails, like nearly everybody else. (My sister still occasionally writes me a long letter delivered via U.S. mail.) But I do compose handwritten notes with the birthday cards I send out, and my wife and I co-write sympathy cards. We know the meaning of a handwritten message.

As Christmas told me, “Handwriting is personal, human and intimate. It reaches people more deeply than typed words on a sheet or in an email. By its very nature, it indicates it was written ‘just for you’ and someone is paying attention.”

She describes herself as “a passionate letter writer. I’ve written letters to friends and family all my life. It’s my favorite way to communicate.”

I asked her how many notes or letters she writes and mails these days. “Three to five a week,” she replied. Imagine that. Imagine doing that!

When I wondered how people can re-establish the handwritten letter or note habit in 2019, Christmas said: “Practice! Find a script that you like and practice it. Then you’ll become more confident in your ability to communicate that way again. It’s a life skill.”

She added that when you sit down to write even a short note, “It does slow you down. I think it’s a marvelous opportunity to get you to slow down.”

Christmas retired from her letter carrier job two and a half years ago because she had developed a thinning  Achilles tendon in one foot and plantar fasciitis in the other foot, the result of all that walking. But she didn’t launch The Write Way until last December. (See www.writealetter.org or email her, ha! at connect@writealetter.org.)

On her website, Christmas wrote: “Emails get deleted. Words on paper endure. Letters are keepsakes.”

She credits SCORE, a national network of volunteers with business experience who help entrepreneurs. She is listening to their advice, including: “Don’t spend money until you make some money.”

But it’s hard to make money by writing notes for other people. She has been “cold calling” wedding planners and funeral homes. “I get a lot of answering machines.”

Recently she provided her service as a volunteer for a political campaign. She wrote 667 postcards for Hamden Councilwoman Lauren Garrett, who challenged incumbent Mayor Curt B. Leng in a Democratic primary earlier this month. Christmas showed me one of those cards, which began: “Hello, Neighbor. Looking for things to improve in Hamden?” (Nevertheless, Leng won the primary.)

But Garrett returned the favor for Christmas, writing an endorsement of her business praising Christmas’ “beautiful penmanship.” Garrett added, “In today’s fast-paced life, it’s important we show people appreciation and love. This is what Carol Christmas will provide for you with a handwritten letter.”

When I asked Christmas how many customers she has had so far, she said, “I’m not even fully out of the chute. I think it’s the culture. I find that people are — I don’t know if they’re not paying attention or they’re more interested in doing things fast. I’m trying to sell courtesy. In this cultural moment, there’s a lack of civility.”

“Can you make a living doing this?” I asked her. She said she needs to be more aggressive in her quest for customers. “I must be professional and treat it as a business. Fortunately, I’m retired, so I can launch this with careful steps. The good news is my dinner doesn’t depend on how quickly this takes root.”

Her rates aren’t expensive. The most she will charge is $5 per letter for a bride who needs to write thank you notes for gifts received after a wedding or bridal shower. She said such a job is more involved for her because she will meet with the customer to discuss the gift and appropriate language. For a senior, it’s $1 per letter page.

Christmas said it’s worth it “if I can write a note or letter so you don’t have to sneak around your grandmother the next time you see her.”

“I don’t know why people think that just because they can’t find time in their busy life that their friends will forget they didn’t send them a note,” Christmas said. “What happens is people are hurt and disappointed. Then they think differently of that person.”

Christmas believes: “Thank you notes must be handwritten for that job interview and that wedding gift received. And words of sympathy are best written by hand.”

She pointed out that stores have racks filled with thank you notes and sympathy cards. Many people don’t know what they should say, especially on sympathy cards, so they just sign their names under the card’s generic words. “In my opinion, that falls short.” She said her sister has sent her Christmas cards but would simply sign her name, without bothering to write a message.

Christmas realizes that in addition to fretting over their messages, many people also are embarrassed about their handwriting. I asked how hers got to be so attractive. “Catholic school! The nuns were sticklers for good penmanship.”

She is pleased to see that “cursive writing is coming back” in our schools. “It’s being taught in 20 states now. That’s still not as fast as I would like it. There has been too much ‘teaching to the tests.’”

Christmas thinks parents should not wait for teachers to work on kids’ penmanship and language. “Kids should send notes. Get them started early!”

She pulled out a drawing that was sent to her. The message on the bottom half was: “Dear Carol — thank you for the books and game.” It was signed by Josie. 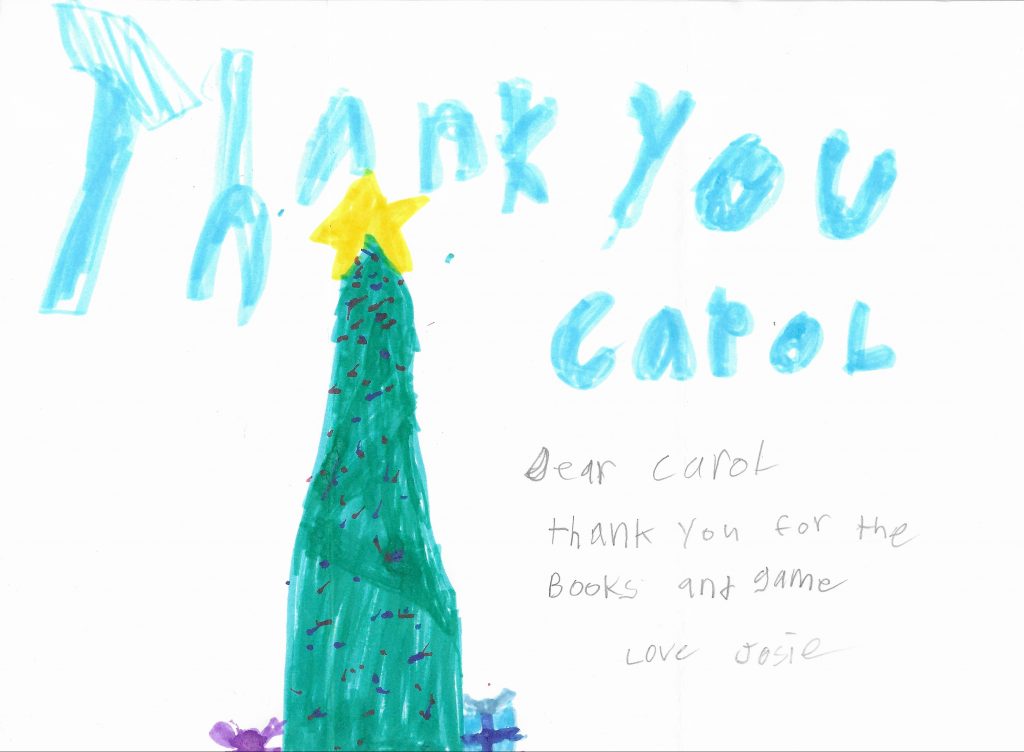