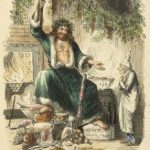 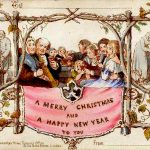 Before printed cards, people sent handwritten messages to each other. Then in 1843, Henry Cole, a civil servant and entrepreneur, commissioned John C. Horsley to design the above Christmas card. Sir Henry Cole (as he later became known) was looking for a way ordinary people could use the services of the newly established  post […]

December 22, 2014   On a recent trip to downtown New Haven, I discovered a marvelous Christmas display of paper cutouts in a variety of shop windows. The best arrangement is in Claire’s Corner Copia, a vegetarian restaurant on the corner of Chapel and College Streets. There I spotted this scene from Dicken’s Christmas Carol. […]

December 17, 2011 “The first Christmas card was privately printed in London in 1843. As the exchange of Christmas cards grew in popularity, commercial  production became widespread in Europe and America, providing customers with thousands of images from which to choose.” -The Metropolitan Museum of Art Also in 1843, Charles Dickens wrote A Christmas Carol which was first […]